Savory and sweet, pears and beets

Hah, it rhymes! The fall haul (hah!) from the CSA inevitably means two things, root vegetables and ungodly numbers of pears. I love root vegetables, but tend to find pears to be pale imitations of apples. But when poached in red wine, or cooked with butter and sugar, pears can have some redeeming value. Recently, for the cooking club, I teamed up to make a dessert with the theme “Fall Harvest.” We were inspired by a recent recipe from the late, lamented Gourmet magazine, Beet and Pear Napoleons with Ginger Juice Vinaigrette. Roasted beets layered with pears, with flavors of ginger, citrus, tarragon, and poppy. In fact, we were so inspired by the dish, that we made it too, and started the dinner with an amuse of the original recipe: 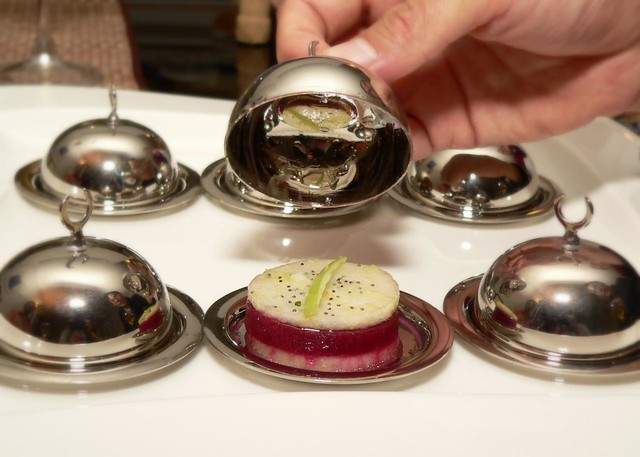 For the dessert itself, we took these flavors and turned them on their heads. The formerly raw pear circles were now lightly carmelized with sugar and butter. The beet, instead of being roasted, was boiled, pureed, and folded into a chocolate cake batter. The ginger juice was mixed into a buttercream instead of a vinagrette. The texture and visual impact of the poppy seeds was replaced with cocoa nibs. The result was an almost perfectly balanced mixture of fruit and butter flavors, sweet and tart, creamy and crunchy. (If I were to make it again, I’d actually add more pear!) We were very happy with the result: 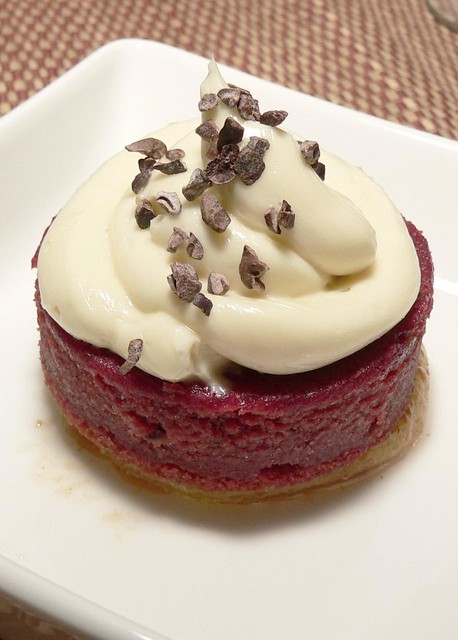